As most of our readers have probably already heard, Riksbankens Jubileumsfond has generously decided to support Ingela Nilssons’ project Retracing Connections: Byzantine Storyworlds in Greek, Arabic, Georgian, and Old Slavonic (c. 950 – c. 1100)! The project is administrated by Uppsala University, involves over ten scholars – including several NBN members – and will run for eight years, starting immediately this month (January 2020). A brief content description follows below:

During the long eleventh century (c. 950–c. 1100 CE), a host of core narratives that form the substructure of what we know today as Christian Orthodox culture were established in the ‘Byzantine’ world. Some were old stories that were systematically codified or rewritten, others were newly created or imported from other traditions. They concerned saints and commoners, heroes and devils, intellectuals and lunatics, in recognizably social settings or in various landscapes of fantasy. These storyworlds cut across secular and religious lines, involved verbal and pictorial arts, encompassed a variety of communities, from aristocratic settings to the common church-goer and school pupil. Most significantly, these storyworlds occasioned intense translation activity, from and into the languages of Byzantine or Byzantinizing Christians: Greek, Arabic, Georgian, and Old Slavonic. The aim of the present project is to revive, preserve, and make available this influential, but largely neglected cultural production. The project aims to study it as an entangled unity from the perspectives of a) storytelling and modern narratology; b) translation and rewriting among different languages; c) medieval book, writing, and performance cultures. By focusing on these four main entangled traditions we hope to illuminate the rich but complex modes by which Byzantine storyworlds appeared and came to be influential for centuries.

We congratulate the applicants Ingela Nilsson, Christian Høgel and Stratis Papaioannou and all the researchers involved, and the whole worldwide Byzantinist and Medievalist community to a project that will enrich research for many years to come!

Five years after the NBN workshop The Straits – Inquiries into a Crossroad took place at the Swedish Research Institute in Istanbul, and thanks to the great efforts of its new director Ingela Nilsson, we are proud to present the outcome in the form of a book in the series Transactions of the Swedish Research Institute in Istanbul, called Constantinople as Center and Crossroad (ed. Olof Heilo and Ingela Nilsson). Six of the original papers from the workshop have been joined by four excellent contributions by Ragnar Hedlund, Fedir Androshchuk, Claudia Rapp and Mabi Angar, creating a diachronic panorama of a thousand years of interactions across Eastern Europe, Central Asia, the Middle East and the Mediterranean, all co-joined at the same nexus on the Bosphorus.

In 2017, the NBN took part in co-arranging a one-day seminar in Stockholm in memory of the Swedish philologist Sture Linnér (1917–2010). The contributions have now appeared as a volume in the series Skrifter utgivna av vänföreningarna för de svenska forskningsinstituten i Athen, Istanbul och Rom under the title Vägar till Bysans (ed. Olof Heilo). For Swedish speakers interested in hearing more, a first book presentation will be held at the Pufendorf Institute in Lund on November 12 at 18:00, and a second one at the Newman Institute in Uppsala on November 18 at 12:00. We also take the opportunity to advertise the Docent lecture of Thomas Arentzen in Lund on the same day as the former event, Fromma träd i tidig kristendom (LUX B251 14:15-15:15)!

ConstSpace: A New Research Network Hosted by the Swedish Research Institute in Istanbul

The research network ‘Constantinople: the diachronicity of public spaces’ (ConstSpace) wishes to challenge current ideas of a clearly distinguishable European center, located in the west of the continent, surrounded by different peripheries. It focuses on Constantinople/Istanbul – once the capital of the Byzantine and the Ottoman empires respectively – and argues that it should be seen as a central and at the same time intermediary space, rather than a border between East and West. The city’s liminality is best manifested in the diachronic central role of the city’s public spaces of encounter, contact, dialogue and otherness – constantly transformed yet persistently stable.

Prof. Lioba Theis (Vienna) offering the participants an introduction to the historical cityscape of Byzantion/Constantinople/Istanbul during a boat tour on the Golden Horn, March 2019

The network, under the aegis of Myrto Veikou and Ingela Nilsson, has met twice in order to discuss possible collaborations in the form of larger or smaller project units: first in Stockholm in December 2018 (a workshop supported and hosted by The Royal Swedish Academy of Letters, History and Antiquities), then in Istanbul by the end of March 2019. The aim of the first workshop was to present and discuss project ideas, especially from theoretical and methodological perspectives, while the second meeting was focussed on the experience of public spaces in Istanbul. The ambulating seminar in Istanbul included visits to Küçükyali, Heybeliada (the Chalki monastary) and a walk along the Byzantine-Ottoman areas along the Golden Horn. In both meetings, colleagues from Sweden, UK, Ireland, Greece, Turkey and Austria participated, offering their individual expertise and ideas to the group.

Dinner after the first workshop at the Academy of Letters and Arts in Stockholm, December 2018

The research network will soon be presented on the new website of the Swedish Research Institute in Istanbul, offering a platform for students and scholars interested in the diachronicity of public spaces with a particular focus on Constantinople/Istanbul. Together, the individual projects of the network will offer a mapping of public space in the Byzantine-Ottoman period, focusing on Constantinople but also bringing in comparative material from other areas. Such a mapping will be of crucial importance to future studies of not only public space in the former Byzantine-Ottoman areas, but also to the understanding of European borders, the role played by public space throughout the ages, and the refugee experiences of said spaces in a diachronic perspective. 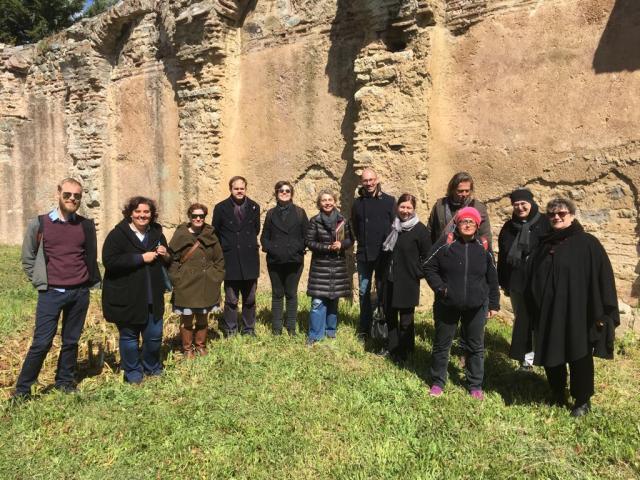 The group visiting the excavation site of Küçükyalı on the Asian side of Istanbul, March 2019, under the leadership of Prof. Alessandra Ricci (Istanbul)

On the day after, the new book in the Studia Byzantina Upsaliensia, Storytelling in Byzantium, was officially presented by the editors Ingela Nilsson and Margaret Mullet, together with the new Brill book Round Trip to Hades, edited by Ingela Nilsson and Gunnel Ekroth.

Left: Averil Cameron at the SCAS

Below: pictures of the book release 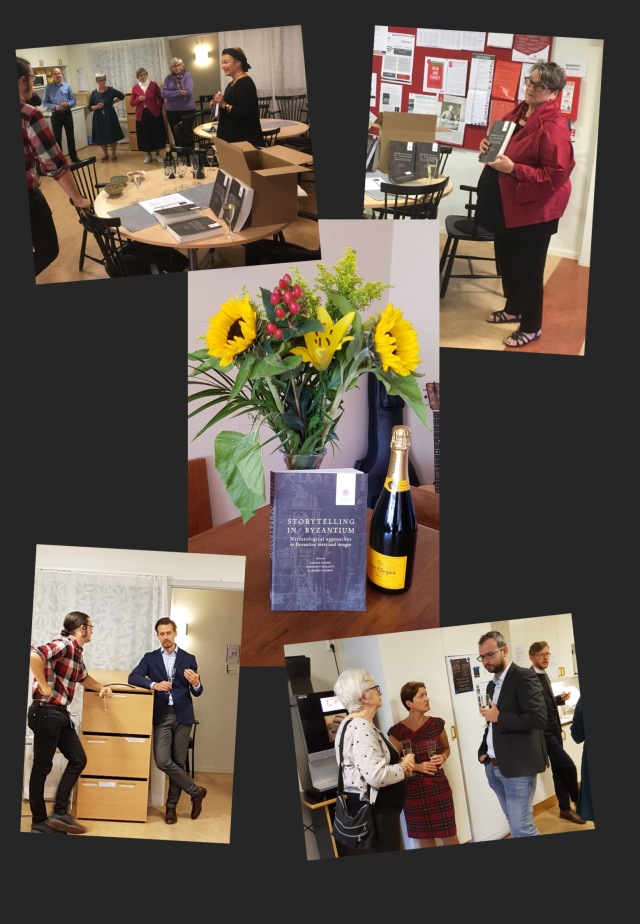 We present to you Storytelling in Byzantium: Narratological approaches to Byzantine texts and images, edited by Charis Messis, Margaret Mullet and Ingela Nilsson!

At the same time, we take the opportunity to inform about earlier studies in the series that are now available as Open Access:

The Life of St Andrew the Fool (ed. Lennart Rydén):